We are delighted to feature Aerin Dunford as a special guest conversation starter on 11/14.  She has been an active participant in our conversations both online and on our Cafe calls, and brings a wonderful depth of group process/conversation hosting experience to our gatherings.

Please use this discussion thread to share anything that struck you about Aerin's talk and/or the conversations it inspired.  Everyone's voice matters: please share yours!

Here is background info and some initial reflections from Aerin:

Aerin Dunford an U.S.-born upcycler, artist, urban farmer and yoga instructor. Since 2005 Aerin has been involved with the work of The Berkana Institute. Her work has been focused on engaging communities of people using participative processes and leadership, and fostering the conditions for deep connection and relationship. She is currently the Sharing Our Learning Director at Berkana. Aerin has a master’s degree in Organizational Management with a focus on leadership and change from SIT Graduate Institute. She lives in Oaxaca de Juárez, Mexico.

From 2006 to 2008 Aerin was a co-steward of the trans-local learning community, the Berkana Exchange. During this time she helped host an international gathering of more than 30 people in Oaxaca, Mexico around themes of community resilience and a movement called the Now Activism. At the same time, in the spring of 2006, the roots of a people´s movement were beginning to take hold in the city of Oaxaca. Shortly after the meeting there was a brutal repression of a group of unionized teachers by the state government. As a result of this violent action, the people (teachers, farmers, merchants, people from all walks of life) "took" the city for a period of almost 6 months, demanding the resignation of the governor, Ulises Ruiz Ortiz. During this time nearly all government offices and services were shut down. There was no garbage collection, no police, no health care services in the entire historical center of the town. At one point during the movement there were over 2000 barricades that were put up nightly by residents of neighborhoods and barrios. Aerin carefully followed the events of the APPO (Asemblea Popular de los Pueblos de Oaxaca) movement from the States after her return. When the movement was violently crushed by federal police forces on November 25, 2006 it slowly dissipated, the APPO became fractionalized and lost focus. Aerin returned to Oaxaca in early 2007 and 2008 to see how the movement had affected the society and its people.

So, as an American now living in Mexico, after having been close to the movement here in 2006 here's what Aerin has to say about what she's seeing with the Occupy movement(s):

"It has been interesting to watch this movement unfolding on my computer screen, far away from the plazas and sidewalks of Boston and New York (both places I've lived for a time). In the beginning, I didn't really understand. I was waiting for those involved in the protest to explain what alternative they were calling for. At an Art of Hosting training in NYC in late September organizers were working with participants to give people a chance to engage in participative, horizontal processes, and practice hosting these processes in real time together. On the last day of the gathering, in the midst of increasing media coverage about OWS, a few participants interrupted the scheduled agenda to propose a visit to Liberty Plaza as part of the gathering - to see participatory leadership in action. Many of the participants did chose to go on this learning journey and the hosts figured out how to adapt the experience into the larger framework of the gathering.

After this happened, I was suddenly very interested in what was happen in the Occupy movement. People were beginning to notice that how they do things might just be as, if not more, important than the what. As I have watched this unfold it has brought to me many questions about what creates the conditions for a movement to be successful? How is success defined? What I saw in Oaxaca in 2006 was many, many people organized around a single demand: get the governor out of office. Period. Though the movement was strong in numbers, and the rallying call was clear and easy to identify with, I ultimately think that having just this one demand might have been the movement's downfall.

Protesting and marching are a very, very popular form of "resistance' here in Oaxaca. But after a while, when suddenly every organization, party and person is marching and striking, these actions lose all their potency. So, I have lots and lots of questions about what's next for the Occupy movement. Here are some of my  burning questions:

How do those involved in the Occupy movement find a dynamic balance between open, inclusive participatory processes and wise, clear action?

How will the movement move from its divergent stage (where I'd say it is now) through the "groan zone" and into a convergent stage in which decisions are made and actions taken? How do we converge and still remain open and inclusive?

How much is this about protesting the old? How much is it about building the new? Are both needed?

Here's a great quote by Buckminster Fuller to get you thinking  ... " 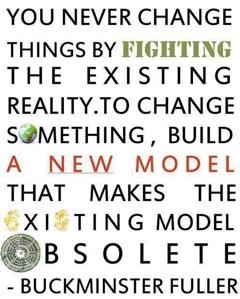 This is something that I finished just after the call that explains my thoughts. I was in the 'what is our new salt and cotton?' group, and we talked much about local resilience. The video is my broader application.