Here are the questions we are discussing on the ground and over the phone on Sunday, the second day of #NatGat, from 1-4pm Eastern.  please join the conversation here on this forum thread as well!

how exactly is anarchism not a good idea but anarchistic capitalism is? that seems antithetical to me

Ah. I would argue anarchistic capitalism is not "real" anarchism. It is libertarianism --> anti-government free market capitalism. Anarchism generally understands that capitalism is itself a coercive system that fundamentally destroys social relations. Hence the inability of capitalism and democracy to co-exist (owners consolidate wealth to exploit workers).

Anarchism is generally a movement towards a classless society. Capitalism reinforces class. At least that is my own reading...

What assumptions do we need to test or challenge in thinking about tension between "reformers" and "revolutionaries" that has emerged via the Occupy movement?

The biggest assumption that I, as someone who feels themself firmly within the revolutionary rather than the reformer camp, would like to test or challenge, is that progress has occurred through nonviolent protests, legislation, and civil disobedience.

Gandhi opposed colonialism. There is more colonialism now than in Gandhi's day. It is somewhat more subtle, in that the imperialist US doesn't install its own ministers to govern conquered territories, but instead installs local people, often trained by the CIA in the US, to administer countries that the US has conquered, in ways that favor the US and disadvantage the peoples of those countries, but are we do not call those countries colonies. Countries which we invaded and conquered, where we assassinated their leaders, destroyed their infrastructure, and installed regimes favorable to us, like Iraq and Libya, are de facto colonies but aren't called colonies. Since the US government assumes it has the right to control the entire world, there has been no real progress in reducing colonialism.

Those who wish to attempt to work within the system often point to Franklin Delano Roosevelt's New Deal as a model of progress achieved through government legislation. But with a few exceptions, almost everything in the New Deal has been repealed. Governments may grant some temporary concessions when their only alternative is to risk losing control altogether, but as soon as they regain control, they eliminate such concessions. There is less regulation and oversight of banks now than there was before FDR, so no real progress was achieved through legislation.

Anti-war protests have been huge, and the global street protests attempting to prevent the Iraq war are said to have been the largest in history with millions of people in the streets everywhere, but the war was not prevented. Indeed there are more wars occurring now than previously. There has been no real progress in reducing wars through protests.

Dr. Martin Luther King, Jr., supported Civil Rights. There are more Black people in prison today in the US than during MLK's time. There are fewer civil rights for everyone. No real progress in protecting civil rights has been made through nonviolent tactics.

I think the tension between reformers and revolutionaries stems from the untested and unchallenged assumption by reformers that past reforms have brought about progress. Unless progress can be defined as more wars, more income inequality, and fewer civil rights, there has been no progress that can be attributed to nonrevolutionary strategies and tactics.

For various personal reasons I do not participate in phone discussions, but I hope that somebody might bring up some of these points in Hour 2.

Hi Ben :
Life happened. The occupy movement needs to have a separate education system that defines life in different terms as opposed to the economic contrivance that we currently have. We will never have a new way, until we have a new weigh. The whole system of what we value has been hijacked to support the ever-take.

We have to end the ever-take. To do this, we have to question some very fundamental issues, like why do we think that democracy or republic is the best form of governance. Or why, during the whole obamacare debate does nobody point out that you stand a better chance of enjoying life if you avoid medical doctors at any cost. Once they have you ...

I think we need to look at life by function, rather than an economic balance sheet. Perhaps the group can think out criteria for measurement - how do we really know if we are getting anywhere? What is 'getting somewhere? If we abolish money - which problems do not go away. What if we abolish debt and keep money? Occupy 8.0 is coming back to see how Occupy 2.0 progresses - make them proud.

I, like Mark, will abstain from the phone call format.

Lemme writes, "...we have to question some very fundamental issues, like why do we think that democracy or republic is the best form of governance. Or why, during the whole obamacare debate does nobody point out that you stand a better chance of enjoying life if you avoid medical doctors at any cost."

I agree. Reformers don't want to discuss fundamental issues that could lead to revolutionary change.

Live video from your Android device on Ustream

#occupyweed (legalize it) -- if over 50% of the American population want it and the occupy movement got behind it, it would be a relatively easy win pointing to a successful campaign with rippling consequences moving through the entire economy. it is a social/ecological justice issue that directly deals with race, prisons, income disparity, health care, sustainable (green) industry, environment...

regarding reform vs. revolution, we are in a process of biospheric collapse. we need to create a rupture with the current status quo/economy. We are working for $, which forces us into jobs that destroy the planet. A mortgage strike would be a radical break with the current state. "abolish the wage-system" is a good starting point too.

In terms of violence--violence can only be against humans. Destroying property is not violent, unless you mean a "violent" break with a governing ideology whose structural violence is killing us all.

Right on, MS. The definition of "violence" as "damage to property" or "resisting arrest, attempting to escape arrest, or defending one's self and others from police brutality," is one of the fundamental conflicts between reformers, those who want better pay and more benefits for jobs that destroy the planet, and revolutionaries who don't want to destroy the planet at any price.

Capitalist imperialism supports the pharmaceutical industry by criminalizing natural cures, and derives much of its black budget from the production and sale of the substances it has criminalized. Legalize it!

Interesting clip, Seth. I thought that Suzanne preferred that despite time constraints, the whole group use nonviolent communications to address the personal needs of those who differ or dissent, rather than being divisive and breaking up larger groups into smaller groups.

I see the imperialist flag in the room, but I don't see the voter registration forms. Surely they must be there?

I was in the group in which "tension exploded", to quote Ben's sense of what was just so in that group.  I want to affirm Suzanne's reminder about the importance of listening to someone...just listening until they are heard.  In an attempt to settle my own physiology in response to what happened in our group...the adrenaline coursing through my body...I am clinging to the remembrance of "kindness" as The Practice....a challenge "we" have is to practice kindness...no matter what...kindness...and listening is a great gift of kindness we can extend to one another...in the beginning...in the middle...in the end.

A group of us in the SF East Bay have been working with a new form inspired in part by the Occupy Movement and NVC called "Deep Listening Posts." Listening Posts are spaces where people can express themselves authentically and be heard. It's also a place for NVC practitioners to build community and be of service to the emerging vision of a world beyond right and wrong. We have listened to hundreds of people over the last few years.  This form is open source and scalable. We are also offering mediations, trainings and group facilitation services. I would be interested in hearing your feedback about this concept. The next post is this Thursday at the Berkeley Farmer's Market. There's more information about our work at https://www.facebook.com/ConnectionAction and http://connectionaction.org 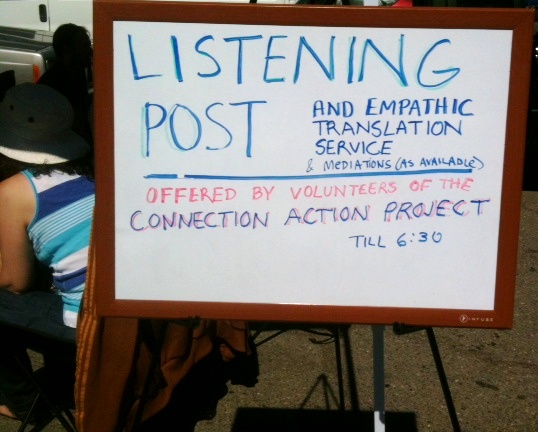 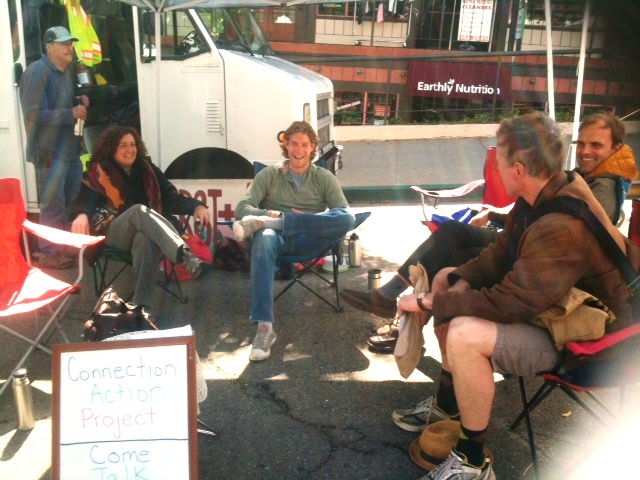 Regarding hour 2 I feel that we need both Reformers,and we need Revolutionaries because some things need reformed such as Taxation Laws but there are some things that need to be abolished like the NDAA which would be revolutionary. So what I see here is a matter of compromise and figuring out where you reform and what you get rid of. I know it sounds like an insurmountable act I know BUT we can do it. Again we need both sides to sit down together with the peace pipe and the talking stick otherwise it becomes an all out shouting match. It's time to come together and become cohesive.If we can't work on this together and come up with a solution that both sides agree upon or what the hell then are we doing this for?