Is what we want Constitutional Reform? 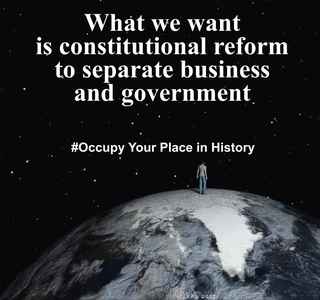 Wondering if the lynch-pin reform that will change everything is a call for constitutional reform to separate business interests from the job of governments?

Seems to me that governments everywhere have been hijacked by the economic interests of the corporations, and as such have forgotten that their job is actually about people and our health and wellbeing, not only about economics and the myth of continuous growth.

Splitting business from the state could be the one reform that could catalyze a wide range of other reforms that would fix a lot of what is wrong with the current system. It would set the stage to change everything.

The good thing too is that there is a precedent! In Europe, 500 years ago during the so-called 'enlightenment', when governments everywhere adopted constitutions that split religion from the state. It was this very fact that formed part of the foundation upon which our founding fathers formed countries devoted to freedom (and not subject to the whims of a church hierarchy).  We need the same now, where our governments and politicians are not held hostage by the economic agendas of the 1%.

Perhaps history would see such reforms as the marker of our times. They are inevitable eventually, the only question is how long it takes us to demand the change.

We do need constitutional awareness to make this movement succeed, but the trick is that we cannot just pass an amendment to the constitution to effect change.  The Supreme Court has already made that an impossibility.  It has said that to get $$$ out of politics, there needs to be a Constitutional Amendment, but it ALSO continues to maintain that the government is not under any obligation to honor the Constitution if it doesn't want to.

The Occupy movement became necessary in 1816, when the Supreme Court - acting under assumed and unconstitutional authority - when it decided a case called Mc Culloch v. Maryland.  Here's the brief:

The 10th Amendment says that government shall have only those powers granted it by the constitution.  As part of the Bill of Rights, it, along with the 9th amendment, was meant to place SEVERE restrictions on the Federal government - and on State governments.

The Supreme Court decreed that it was an expansion of government powers - rejecting the conditional ratifications of six of the nine states required to ratify it.  It said that the 10th Amendment means that government shall have every power unless specifically denied it by the constitution, and even then it can assume specifically denied powers using the necessary powers clause as well as something called "implied powers".

But it went further than that.  It said that the Constitution is not the Law of the Land, as the text says that it is.  It said that it is a series of suggestions that government should meet when possible.

And then it went further.  It said that the allowing the people to vote on this through the amendment process was too harmful to the government, and that people should never be consulted on matters as minor as this.

Then it went farther.  It said that states are not sovereign and their conditional ratification of the constitution was unreasonable - meaning that they would have no power to influence government.  It replaced our "Constitutional Republic" with a system of laws and judicial precedents, commonly known as British Common Law (which is how $$$ is now equal to speech and how you are now less important that the piece of paper that a corporate charter was written upon).

Oh yes, it went farther.  It established the new, replacement government as a "system of checks and balances" while placing itself as the most powerful branch - the only branch with unlimited power.

It said more, but this decision ultimately allowed government to establish an unconstitutional bank.  that is when power began flowing away from the people and into the hands of the power brokers who sold our government "of, by, and for the people" to the Robber Barons.  (Goldman Sachs is only the most recent version of a Robber Baron).

We do not need new constitutional amendments that treat the symptoms of this initial breakage in an otherwise fine government - just as we do not treat symptoms of a break in a water main.  We fix the problem. That's what we must do as well.  we need one Amendment - and that Amendment should restate and reaffirm the 10th Amendment and state that in the rare case that there is a question about "interpretation", that it should be decided in the light of the interests of the RATIFIERS of the Constitution. (This because as much as we hear about the Federalist Papers, they were a FAILED argument.  The Anti-Federalist papers are the sentiments of those who wanted a LIMITED government that the Constitution (with the Bill of Rights) promised us.

If we try for any other amendment, we will fail.  Do you remember the 27th Amendment?  it took Congress about three weeks, and the courts about three months to determine that an "adjustment in pay" is not a "pay adjustment".

LET'S FIX GOVERNMENT AT THE POINT OF BREAKAGE - return power to the people - and go from there.