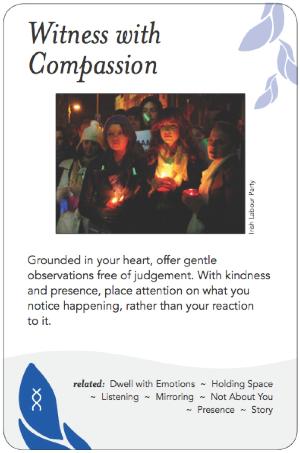 We're taking a break from our MaestroConference calls today, and invite you instead to offer some reflections here on the OC.org forum about what Memorial Day evokes for you.

I was in the supermarket the other day and was greatly irked by a reference over the PA to honoring the soldiers who fight "to preserve our freedoms."  And not least because they were using that as a reason to sell barbecue sauce.  I imagine I'm like most Occupiers, in that I don't believe the wars we have fought have had anything to do with our freedom, but rather have been about our fear, our racism, our addiction to oil and the self-perpetuation of the  military-industrial-complex.  Fighting Hitler might be the one exception, and it was the Russians that did most of the heavy lifting there.

When I reflect on the soldiers who have died in America's wars, I think about the waste of their lives and the terrible pain and suffering they inflicted in the name of a lie.  And yet, I DO want to honor them and the sacrifice they made.  Tom Englehardt, one of my favorite thinkers on the subject of the US military, offers a reflection on Afghanistan, "the forgotten war," on his Tom Dispatch blog.  He writes:

Afghanistan has often enough been called “the graveyard of empires.”  Americans have made it a habit to whistle past that graveyard, looking the other way -- a form of obliviousness much aided by the fact that the American war dead conveniently come from the less well known or forgotten places in our country.  They are so much easier to ignore thanks to that.

Except in their hometowns, how easy the war dead are to forget in an era when corporations go to war but Americans largely don’t.  So far, 1,980 American military personnel (and significant butlargely unacknowledged numbers of private contractors) have died in Afghanistan, as have 1,028 NATO and allied troops, and (despite U.N. efforts to count them) unknown but staggering numbers of Afghans.

So far in the month of May, 22 American dead have been listed in those Pentagon announcements.  If you want a little memorial to a war that shouldn’t be, check out their hometowns and you'll experience a kind of modern graveyard poetry.  Consider it an elegy to the dead of second- or third-tier cities, suburbs, and small towns whose names are resonant exactly because they are part of your country, but seldom or never heard by you.  [Englehardt then offers a list of those soldiers and their hometowns.]

What is your compassionate witness, on this day filled with so much jingoism and denial?

US veterans comprise less than one percent of the population (300+million).  US politicians (111th congress) who are veterans total around four and a half percent (121).  Of those, roughly twenty five percent are combat veterans (30).  The rest served in champagne units well away from any real danger.  The US spends roughly forty three percent of the world's military expenditures.  The US has the largest defense budget in the world. (533.8 bil fy 2010 with an additional 130bil for the "war on terrorism").

Our vets today are (typically) economically disenfranchised before and after they serve.  They are asked to do unspeakable things and are spiritually and emotionally compromised when they return home.  Some will become addicted, homeless, and fade from the public psyche.

They are our children.  If it takes a village to raise a child,  today I'm wondering what will it take for the village to make some changes?

I do what I can to help my fellow veterans cope with learning "life skills" and to reintegrate into society.  I'm hoping others will too.  I'm also hoping that someday those in leadership will be held accountable for their actions, and I feel a deep sense of responsibility for my role in allowing these things to happen.

It's a great question, Ben. You and I are essentially in the same place: desiring to honor the war dead (perhaps not just "our" war dead?) while witnessing to war's ultimate absurdity. In wrestling with this, I tend to focus narrowly on the motivations and cost to those in the military. Many have given their lives; many others have given up important life stages, the chance to watch their children grow, even their mental and emotional stability. They did this (or so I assume) because they saw a need to sacrifice those cherished personal lives for something larger. I may vehemently disagree with the cause they fought for, but I can still honor the fact of their self-sacrifice--particularly as my own faith tradition (Christianity) calls for a similar brand of self-sacrifice. In that way, they truly are heroes.

We need to contemplate doing something about this

If you search death czar, you will find all parts of the thinking political spectrum upset and weighing in about this.  Reaching out across boundaries to deal with it can be an important mission for those inclined to protect U.S. people from actual danger.

The NY Times is out today with a lengthy expose of the whole process of targeted assassination, in which Brennan, the "death czar" mentioned in the Salon piece Mary cited above, features prominently.

Mr. Obama has placed himself at the helm of a top secret “nominations” process to designate terrorists for kill or capture, of which the capture part has become largely theoretical. He had vowed to align the fight against Al Qaeda with American values; the chart, introducing people whose deaths he might soon be asked to order, underscored just what a moral and legal conundrum this could be...

Beside the president at every step is his counterterrorism adviser, John O. Brennan, who is variously compared by colleagues to a dogged police detective, tracking terrorists from his cavelike office in the White House basement, or a priest whose blessing has become indispensable to Mr. Obama, echoing the president’s attempt to apply the “just war” theories of Christian philosophers to a brutal modern conflict...

Tellingly, however, the Times piece focuses on the challenge of avoiding killing "innocent people" who happen to be in the vicinity of the "legitimate targets" they have identified, without ever mentioning the core problem of presuming guilt of anyone without due process and the sanctioning of assassination as a tool.

Here are some similarly conflicted sentiments about honoring our soldiers and the use of the term "hero" from Chris Hayes on MSNBC:

I feel… uncomfortable, about the word because it seems to me that it is so rhetorically proximate to justifications for more war. Um, and, I don’t want to obviously desecrate or disrespect memory of anyone that’s fallen, and obviously there are individual circumstances in which there is genuine, tremendous heroism, you know, hail of gunfire, rescuing fellow soldiers, and things like that. But it seems to me that we marshal this word in a way that is problematic. But maybe I’m wrong about that.

I am also very sad that so many who seek to put others before themselves end up in the military, of all places.  We are so desperately in need of new economic forms that allow people to offer their greatest gifts in service to the whole and in ways that are healing and constructive, based in empathy, love and compassion.  And perhaps we are closer to being able to provide such opportunities than it appears.  It is so tempting to think that some giant government program is the means for providing this alternative, but what if the ability to do so is at our fingertips, right here in our communities?