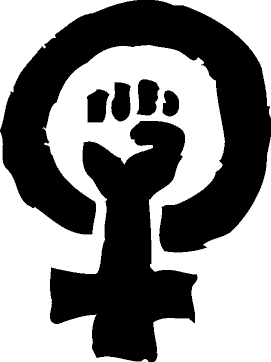 We are delighted to welcome back Stephanie Van Hook, executive director of the Metta Center for Nonviolence, for this conversation on the intersections of feminism, Occupy and non-violence.

Please post your thoughts here in advance of, during and after our Cafe Call.

"There is still insufficient understanding of the depth of both the psycho-social and structural holds that patriarchy has on our culture and politics. "

What do YOU think might be one leverage point for addressing the challenge of patriarchy in our culture and politics?

Yes,  Gael, you are right and I was wrong in saying that we can't love groups, as long as we define love in a nonpatriarchal way. What I was referring to when I said that was people who define love in the patriarchal way, which isn't love at all, just sex. Thus, saying "I love men," or "I love women," or "I need a man," or "I need a woman," isn't about love at all, it is just a statement of one gender role preferring to relate sexually and through role play to the same or a different gender role. For example, saying "I love women," or "I love men," is not the sort of embracing love you're talking about Gael, such as loving one's children or loving mother earth, but is more like saying, "I would prefer anyone with a particular genital status and gender role to anyone with the other genital status and gender role."

I don't love those who are inflicting harm on the planet for profit, regardless of whether they are male, female, or intersex. They don't share my values. The patriarchal version of "love" is nothing more than the example of an Emelda Marcos loving shoes and having hundreds of pairs of them. That's greed and materialism, not love. Certainly a person can like material things, but if it is to excess it is a vice or addiction, not love. Having hundreds of pairs of shoes or six palaces when you don't need them and there are many people who have no shoes and are homeless, isn't compassionate.

Patriarchy fears love and did everything it could to destroy it. It didn't totally succeed, but it certainly did succeed in killing authentic individual-to-individual interactions and forcing people to relate to each other in terms of gender roles rather than as individuals. The typical US male today, who has been exposed to porn since age ten or even earlier, has a distorted idea of what a female is and what a female should be expected to do. By the time he is old enough to marry, he might be so jaded that he needs Viagra to have sex. Wanting to possess and exploit members of a particular group of people is not love, no matter how many times a person may say they "love" members of that group and truly believe it. Loving a person is not the same as loving shoes or cars.

We can love groups. I certainly feel love for the brilliant, passionate anarchists I met at Occupy, but I don't want to possess them or have sex with them. If the definition of love is a narrow, patriarchal definition, then a collector can "love" stamps or coins. I don't want to "love" or "be loved" in that narrow sense. Indeed, I think an argument can be made that "love" for material things in excess is hatred and contempt for people and the planet. A certain amount of material things are necessary to a comfortable, dignified life, but an excess of "love" for material things is responsible for the ongoing resource wars that pollute the planet and kill millions of people.

When people have healthy relationships, love is defined in the ways you so eloquently described, Gael--the cosmic love that inspired your dream. But there are many males in patriarchal societies who force themselves on or exploit females sexually, who claim that they "love" women, when they have no respect or compassion for females whatsoever.

I met a guy many years ago who had owned a large business that had made him a millionaire, and had a wife who he thought loved him, and who had lived happily that way for decades. Then, due to circumstances beyond his control, his business failed. He wasn't concerned, as he knew that he could start all over and create a new business. But he was traumatized when his wife left him, as he had never suspected that it was his money that his wife had "loved," not him. He'd really expected his wife to stick with him and help him start over. Perhaps I could say that "love" without compassion, is not love at all.

Yes indeed love without compassion is not love at all. It occurs to me tne thing that stands in our way of changing this is inherent in our present system where the economic situation demands that two parents work - a new born childs brain is undeveloped compared to a horses, the horse can stand,  move and get around from birth the human child learns this gradually over the first few years including learning what love is and interaacting making connections learning to recieve love and compassion having its needs met from an unstressed loving parent helps it to develop these qualities. One to one with the nurturing parent or parents,  constantly available during the first few years it develops and learns to aquire and develop the same loving capabilities. stressed parents or absent parents mean the child does not acquire these skills that are essential for peace and happiness. Compassion is something we learn from our parents knee not from strangers and childminders.                                       Another major block is also our present economic system, our two major industries help perpetuate the status quo without them the economy fails and we hit serious economic decline. What are these industries? The war machine and pharma, that is why our governments are so reluctant to change, why they are so eager to go to war, and why they try to outlaw natural medecine, and all the major banks invest in those, we are too if we bank with the major banks, Better to invest in a local currency or cooperative. That is why many in government top jobs, and heads of corporations etc have no compassion for the plight of the 99% most had a succession of nannies and did not recieve that one to one nurturing, so in a way they perhaps they could not help it. How do we change this present system which is perpetuating more of the same.?

I'm excited we will be continuing to get into this topic this coming Monday July 2nd at 8am PST (11am Eastern time)  in conjunction with the Occupy National Gathering!   Invite your friends!

Portland and Philly.  you could gather your own group too if you wish.