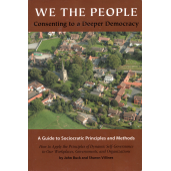 Would you like to live in a world where there is inclusivity, transparency, power-equivalence, respect, nonviolence, effectiveness, and fun, among many other values?

The sociocratic experience of Gerard Endenburg and John Buck provides a clear path to transform our decision-making process so that this world can start emerging.

The purpose of this group is to formulate, share, and support the sociocratic structure of governance for the Occupy Movement.

You need to be a member of Occupy Structure and Governance to add comments!

“What lever can Occupy use to move the world?”  This question was posed by C.A. Bradfield to open his discussion: “Building The Critical Mass Occupy Needs.”  I would like to explore the connection between Bradfield’s (Sea’s) question and the paper: “A PROPOSAL FOR OCCUPYing ORGANIZATION 2.0*.”

The connection seems obvious, but it might help to compare the proposed organization to another organization well known to history, the organization that precipitated the French Revolution.

Prior to the revolution, the government wanted to avoid financial collapse. The crisis forced the King to summon an Estates-General. This body represented each of the three Estates of French Society. The government invited each of the three classes to draw up a statement of complaints and grievances. Within each class, the delegates summarized the district statement to form the provincial statement. They then presented a summary of the whole to Louis.

Formation of the statements for the Third Estate (peasants) began with local assemblies. Village churches hosted many of the meetings. Each of these initial meetings included about one hundred voters. This is where the people formed new ideas and sharpened their understanding of what they wanted for their nation.

The French Third Estate created a lever that moved a nation, a  document that spoke with one voice.  We could do the same.

But instead of forming a temporary structure to produce one statement, we need to form a permanent structure to guide the movement. The structure should be designed to accommodate collaboration among all the people who want to collaborate.

If these were physical assemblies, many people would not be able to participate because of travel expenses and physical difficulties.  Also, if we send delegates off to conventions, we would eventually encounter the same conditions that gave rise of to lobbying in our current governing bodies.

I suggest we try to organize virtual assemblies conducted through the Internet.  I don’t see how we could apply the same collaborating techniques used for Circles to the virtual assemblies.  We might try something like the Delphi technique with some modifications.

I first encountered the Delphi method years ago during a seminar on forecasting.  It was described as a debate conducted in rounds.  In the first round, each participant wrote an anonymous response to the question being addressed.  The moderator(s) summarized the responses, and anonymous rounds were continued untill the question was resolved.  I just now Googled “Delphi technique,” and there seems to be many variants.

The Delphi technique is touted as a rational way to make decisions, but that doesn’t mean that emotions can’t be invoked by submitting videos or other graphic forms.

One of the advantages of using a virtual assembly instead of a physical gathering is that several independent questions can be addressed at the same time.  See my paper on “Rules for Cyberland” at:

See also my statement at:

Clark and Scott are part of the circle that I was thinking will initially support Sociocracy here at the Cafe.

I invited Ron Czecholinski, Cheri Torres and Scott Krabler to join this group as well, btw.  I see that Ron's here already.  You two know each other, I presume?

I saw that while we were still on the call, so he's got the new one too.

Ben-  Just uploaded a newer version of "Occupying Organizations".  If you have contact with "Bucky Fuller", please let him know.  I think he might find it more helpful.

PS  thanks for the graphic!

Tried to get John Buck/s book to load as a thumbnail for this group and partially succeeded.  Feel free to amend it, Clark!

Thanks for creating this, Clark.  We just found it while discussing sociocracy during  our Connect 2012 call today.   "Bucky Fuller" is planning to share the pdf with his Dallas GA.