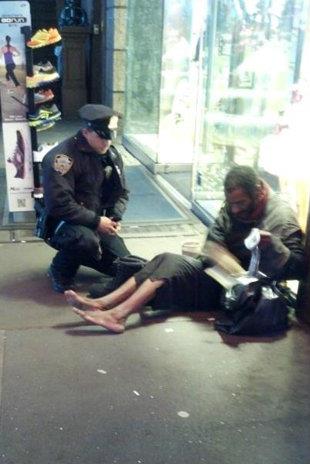 he homeless man who was photographed being given a pair of boots by a New York City police officer in Times Square on a bitterly cold night last month was spotted on the Upper West Side on Sunday. And he was once again barefoot.

"Those shoes are hidden," Jeffrey Hillman, the 54-year-old homeless man, told the New York Times. "They are worth a lot of money—I could lose my life."

On Nov. 14, NYPD officer Lawrence DePrimo, who was on counterterrorism duty in Times Square, saw Hillman without shoes sitting on 42nd Street. DePrimo, 25, left and then returned with a pair of $100 boots he bought at a nearby Skechers store, knelt down and gave them to Hillman.

The random act of kindness was captured on camera by an Arizona tourist, who emailed the photo to the NYPD. It was then posted on the NYPD's Facebook page and soon went viral, generating more than 600,000 "likes," 47,000 comments and countless warmed hearts.

Hillman—an Army veteran and estranged father of two who said he's spent about 10 years homeless in New York—told the Times he did not remember the photo being taken, but was aware of the attention it's received.

"I was put on YouTube," he told the paper. "I was put on everything without permission. What do I get? This went around the world, and I want a piece of the pie."

"I appreciate what the officer did, don't get me wrong," Hillman continued. "I wish there were more people like him in the world."

He added: "I want to thank everyone that got onto this thing. I want to thank them from the bottom of my heart. It meant a lot to me. And to the officer, first and foremost."
Hillman's brother Kirk lives in Nazareth, Pa., and according to the Daily Mail had not heard from since January.
"We love our brother very much," Kirk Hillman told the Daily News. "Our door is always open to him, but this is a lifestyle he's chosen." love it.