My last couple of blog posts might seem kind of negative. But geeeez - this stuff is crossing my desk too regular now, and I feel we all need to be aware of the strange things that are going on.

A bill was just passed by the Senate that is said to effectively end the Bill of Rights. Read below ... 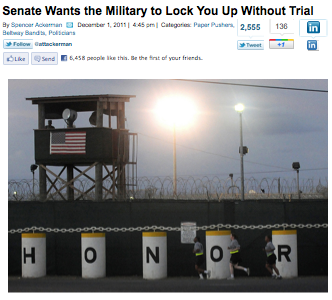 In a stunning move that has civil libertarians stuttering with disbelief, the U.S. Senate has just passed a bill that effectively ends the Bill of Rights in America.

This bill, passed late last night in a 93-7 vote, declares the entire USA to be a "battleground" upon which U.S. military forces can operate with impunity, overriding Posse Comitatus and granting the military the unchecked power to arrest, detain, interrogate and even assassinate U.S. citizens with impunity.

Even WIRED magazine is outraged at this bill, reporting:
...the detention mandate to use indefinite military detention in terrorism cases isn’t limited to foreigners. It’s confusing, because two different sections of the bill seem to contradict each other, but in the judgment of the University of Texas’ Robert Chesney — a nonpartisan authority on military detention — “U.S. citizens are included in the grant of detention authority." http://www.wired.com/dangerroom/2011/12/senate-military-detention/

And mainstream media news has blacked out this entire issue: http://www.businessinsider.com/the-medias-blackout-of-the-national-...

Is this for real? Is it actually possible that this can happen? How might this impact the Occupy movement? And how about our lives as U.S. citizens? How much creepier than this can it get?

We still have a chance on this one..the presdient has said he would veto with these provisions in the bill.  This is a perfect moment for Occupy and the 99% to come together in overwhelming support for the President's veto.

I have been trying to get Occupy and occupy Cafe to pay attention to this bill for some time..David Eggleton was interested..Doreen, a dynamo, used her vast social network to get word out...otherwise not a single spark apparent here at Occupy Cafe or by Occupy.

I did as Doreen did I went on connecting  with others who were working to make this known and encourage action against it .  After the fact I wrote to my two sentaors to express my dispapointment and posted their votes on my website..also right here at Occupy...I also posted the disppointing vote of our two sentaors on my facebook.

You are right this is what we need to be paying attention to..Holding up, naming, encouraging action on.

Let's see if Occupy  and Occupy Cafe can do anything useful in building massive support for the preeseident's veto.

We still have a chance on thisone..the prseident has said he would veto with these provisions in the bill.  This is a perfect mment for occupy and the 99% to come together in overwhelming support for the President's veto.

Here is atempered and informative commentary on te significance of the sentate defeat of the Udall/Web ammendment last week..also an inteligent analysis of the issues which even hawks have with it.

I hope every one who is concerened about the implications of the the provisions udall/webb sought to remove will get word out..constructively, informatively on where the battleground is...with the President.  Call on the president to veto as he said he would.  write to your senators who failed to support the Udall Webb ammendment  and ttell them what you think..publish your sentator's disappointing action on your facebook page.

oops forgot to include the link on the detention without charges issue http://www.humanrightsfirst.org/2011/11/29/national-security-at-ris...

Move on and many others had them going a few weeks agao..Not aware of any petition active now..(actually I am not even sure there was a sentate vote on the bill itself ..I am only aware of the vote lastT hursday ( isn't that the one I sent you the actual votes on for you to broadcast on your social networks)  I am aware that Obama has pledged to veto it if it is approved with these two ammendments in and I think he should have big show of suppprt on that.

How about Flash mobon that Occiupy? Oh  I forgot, its not fashionable for anarchists to acknowledge any systems of power and coercion.....

I haven't read the actual text myself but that is not what the ACLU's lawyers are claiminghttp://www.aclu.org/ Around thanksgiving when these two provisions were slipped in I posted about it here at Occupy Cafe ( via blog I think) and at that time did read the language of the two provisions.  If they havent chnage they definitely allow gunatanmo style arrests and detentions and more over there is no protection against that in the Contsitition of the U.S.

I don't want to spam by repeating myself but I just posted a fairly lengthy explanation of where I think this comes from and what its about..fear of civil unrest in the event of an economic collapse.

One of the issues the broad wording and use of the term "belligerent"..obviously th ehuge show of police force against occupiers including the peaceful visit to the winter garden Occupy Brookfield and thepaparent stepped up  training in crowd control tactics used against occupiers says officiials regard occupy actions as belligerent.

I don't think anything came of a planned mass rally against the bill on Thursday.

It has to be  acentral work and costructive focus of Occupy.

I just got a message from Senaor Snowe assuring that the bill that was passed 99-1 did have language in it exempting american citizens on amaerican soil.  I haven't read the ytext myself though.  Has any one here reda it? is this true?  Is there no possiblity Occupiers or other free assembly protestors can be deemed terrorists and treated like terrorists?